With Gainesville, FL being a University town, the Condominium market has historically been a large part of our real estate market.   With all the changes that have taken place in the mortgage lending industry and FHA mortgages this year, it’s important to take notice of how it all affects the Gainesville market.

Here is an UPDATE from Dan Coffey at HomeBanc, NA here in Gainesville.  (Published here with authors approval)

“As I wrote a year ago, when FHA announced that pre-existing condo approvals would expire on 12/7/2010, I wonder if they realized it was Pearl Harbor day.  Be that as it may, next Monday something north of 80% of the FHA approved condos currently approved in the nation will lose their approval.  I have tried to find out if that means they will still issue case numbers on Monday, or if ‘Expires 12/7/2010’ means Monday is too late.  So far I can’t get an answer. So, as always I am going to assume the worst, which means you should plan on this Friday, December 4th, being the last day to get an FHA case number before all these condos turn into pumpkins. 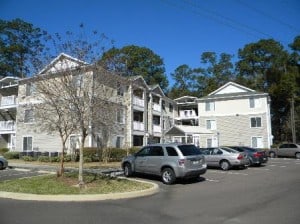 Countryside at The University

*Eligible for Recertification – see below

As of today, these are the only approved condos left on the list after the 12/7/2010 deadline:

Something you need to know – just because a Condo on the approved list does not mean you are out of the woods.  During this past year it appears FHA has been approving the legal documents, and listing the Condo as approved, without regard to the all important owner occupancy and delinquency ratios.  Every lender is required on Every FHA condo loan to certify that the investor ratio does not exceed 50%. (That is one way of saying that second homes count as owner occupied).  Also the lender must certify that no more than 15% of the unit owners are 30+ days delinquent on their dues. I have serious doubts that some of those on the approved list could prove one or both of those things.

Those condos originally approved prior to January 1, 2000 must go through a Re-Approval Process.  Those approved on or after January 1, 2000 may go through a Re-Certification process (*I have placed an asterisk beside the two expiring condos above that qualify for recertification).  If you would like me to send you the rules/guidelines for either or both these processes, just email and I’ll forward. My email is Dan.Coffey@homebanc.com   When I try to attach it to one of these multi-recipient emails it often kicks back to me (showed up as spam on your end). In either event, plan on 30-45 days at Atlanta for re-approval, after they receive it.

Approximately 80% of FHA approvals on condos expired on Tuesday.  I believe they realized how devastating this would be…

FHA Has Amended Their Rules Regarding Expiration of FHA Condominium Approvals. In a letter to lenders issued late yesterday (Wednesday), they stated “The extensions were granted to reduce the impact of processing and reviewing the number of project approvals expiring at the same time while recognizing current housing market conditions.  Lenders and/or other interested parties are encouraged to begin the re-approval or recertification process as early as possible as it is not anticipated that any further extensions of project approvals will be issued.

The extension dates based on five-year time frames with the exception of those condominium projects with original approval dates from 1972 -1985.

The extensions were granted to reduce the impact of processing and reviewing the number of project approvals expiring at the same time while recognizing current housing market conditions.  Lenders and/or other interested parties are encouraged to begin the re-approval or recertification process as early as possible as it is not anticipated that any further extensions of project approvals will be issued.

All Florida condos must have re-approval or re-certification through the Atlanta Home Ownership Center.”