Are you looking for some COOL things to do this weekend in Gainesville?  If you haven’t been to the Kika Silva Pla Planetarium at Santa Fe College, then this is definitely the weekend to go.  There are 5 different shows scheduled and there is something that will interest everyone in your family.     I have seen the Florida Skies production and it was very good, and that show is Friday night.   Then there are 4 other shows scheduled for Saturday.

There is a Music 360 Show Saturday Night at 9pm with Led Zeppelin music.  I am planning to see that one!  If you haven’t seen a 360 Music show, you need to come “experience” one at our wonderful planetarium! 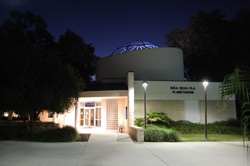 Join James Albury, co-host of the PBS TV Show “Star Gazers”, as he takes you on a personally guided tour of our night sky, using our GOTO Chronos Space Simulator. Florida Skies is our weekly star show that familiarizes you with some of the popular constellations visible from sunset to sunrise, as well as the stories behind them. We’ll also show you how and where in the sky you can find the brightest planets. A Kika Silva Pla Planetarium production [Show time: 60 minutes], All Ages

SpacePark360:  Geodesium Edition is an immersive entertainment show for fulldome theaters — an amusement park with its rides placed throughout the solar system. It’s an educational amusement park experience of astronomical proportions! If you’re a theme park ride aficionado, you may recognize some of these famous rides… but you probably never imagined them at such extra-terrestrial locations.

For centuries, humanity has wondered whether we are alone in the Universe. Now, we are finally one step closer to knowing the answer. With the discovery in 1995 of the first planet orbiting another star, we now know that planets are not unique to our own Solar System. In fact, these “extrasolar” planets now appear to be quite common. “Extreme Planets” will explore what makes a planet “Earth-like” in the first place, and take an immersive fulldome tour of several worlds that just might fit the conditions we’re looking for.

In anticipation of the longest period of daylight this year (June 20th, 2012), The Kika Silva Pla Planetarium proudly presents the “sequel” to our popular Legends of the Zodiac series, “Legends of the Zodiac: SOLSTICE”.  Twice a year, civilizations around the world have been treated to extreme hours of daylight and darkness. Find out what causes all this extra daylight during the summer, and why the sun sets so early in the winter. Also, learn the stories behind the constellations of the Zodiac visible during this time of year.

Even after 35 years of laser shows, “Led Zeppelin” remains one of the most popular music shows ever performed in planetariums, neck and neck with “Pink Floyd.” Now see what Clark Planetarium Productions has done with it for the fulldome! This show delves further into the surrealistic environments than any other music entertainment show, transporting visitors into dozens of mood provoking settings. The motions are more calculated to heighten the transportive feeling, drawing audiences deeper into the scenes. And our planetarium dome is ideal for providing this immersive effect.