Over a year ago, my dishwasher died and I bought a new one.  Just a standard Kenmore from Sears.  But after a couple of months, that darn “new” dishwasher just wasn’t getting things clean.   And worse, my glasses looked very cloudy.  I called Sears and they sent a dude out.   He fussed at me for using “too much” Cascade power and adjusted the liquid “Jet-Dry” dispenser.  He suggested to try the “dishwasher cleaner” product.

He found nothing wrong with the machine…. it was a “user error”.

Did that fix my problem?  Nope. I was using less Cascade and would let the jet dry dispenser go empty.   The dishes and glasses got worse.  A white power, baked on…all over everything!  I called Sears again?    Then again…..

I tried different soaps/brands. I had started throwing away glasses that were so cloudy they were embarrassing.  The silverware was always covered with white powder and I had to hand clean them when I set the table.   After 4 service calls from SEARS, we were convinced we had a lemon of a dishwasher.  My son said, let’s just hand wash the dishes every night and stop using the dishwasher. 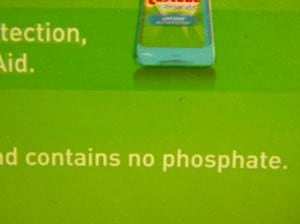 BUT…..then I heard something on a Good Morning America segment about “cloudy dishes“.   I perked up and started talking to my TV and listened to the segment.  They even had a spokesperson from Cascade explaining this and that they working on a remedy to the cloudiness and white power effects.  Apparently, all the “new and improved” dishwasher detergents NO LONGER HAVE PHOSPHATES! Without those pesky phosphates, the “white cloud” is all over everything you put in the dishwasher.

He provided a solution to fix it. It sounds like a simple remedy from the Old Farmer Almanac, or granny’s kitchen. 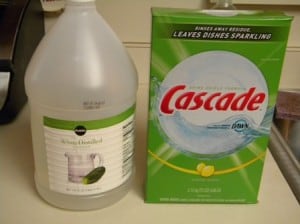 We don’t use the “heat cycle” at all.  But after the dishwasher finishes it’s final rinse, we open the door and and about a cup of vinegar and re-start that puppy on a “light wash”.    The dishes are clean, the glasses are CLEAR AND SPOTLESS, the silverware is now silver without white scrounge everywhere.

Yes, we are having to run the dishwasher twice for each load.  But, problem solved.

I do wonder, why doesn’t the Sears Technician  know this?   I guess they liked my “service call charge” money huh?

I’m not throwing away anymore glasses, and kitchen happiness is restored.